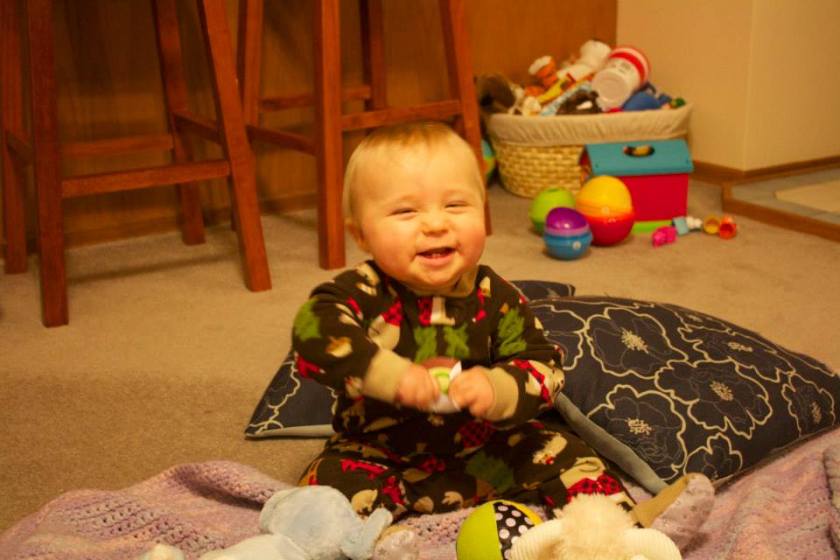 How many times a day can I say, “Books are for reading, not for eating?”

Especially common in parents with infants: 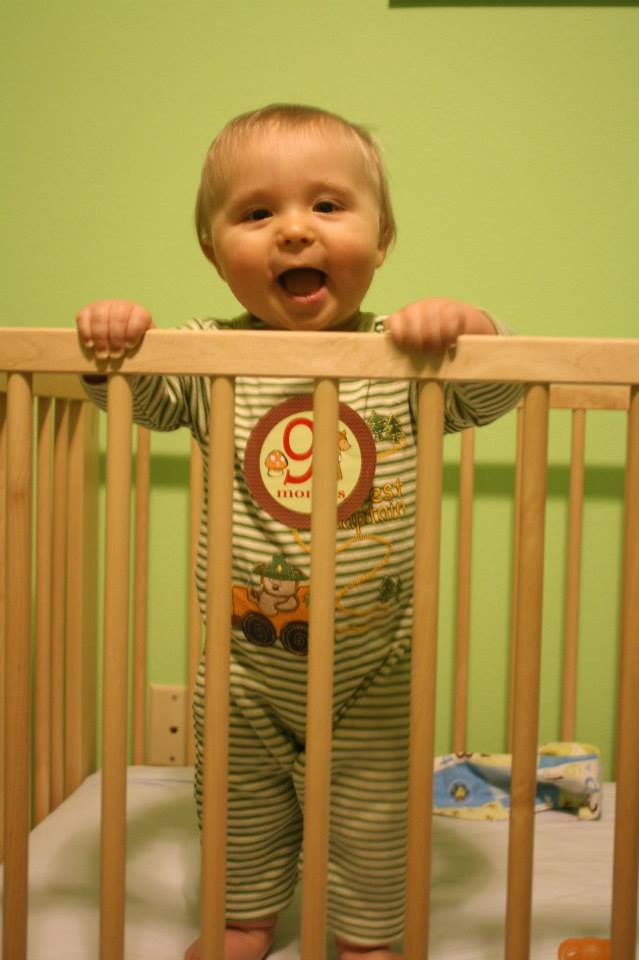 Lately, my morning “workouts” have consisted of dancing around/running in place/what-have-you while watching The French Chef on DVD. In general, Sam finds this very boring and pays attention only to his toys, but he does perk up whenever he hears the theme song.

Sometimes motherhood means not finishing your exercise video because your son is cranky and has pooped his pants. Sometimes it means staying home from a ski trip because he’s been a terrible sleeper and you can’t imagine the horror of four cumulative days in the car and six nights attempting sleep in the Pack ‘n’ Play.

Put Sam down for a nap a little while ago. Rather than sleeping, he’s lying in his crib, shouting “Ai! Ai! Ai! Ai!” He might have turned into a puppy.

Trying to schedule the boy is like trying to use strategy in the labyrinth.

Scout has learned: at the dinner table, beg from the baby. 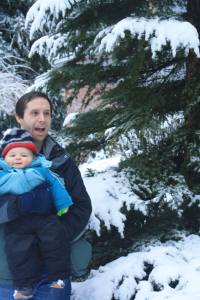 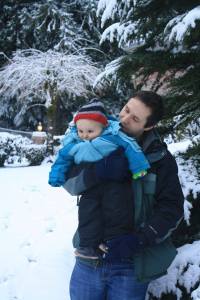 For the kind of pain they’re putting my baby through, there better be like six teeth coming up at once.

Sam is starting to obey when I say, “Kiss me!” (Sometimes I have to kiss him first to remind him what I mean.) It’s pretty cool, but his kisses are a little, um… French.

I’m beginning to understand how all those roller skates ended up in places where Goofy could step on them.

First day having a sitter watch Sam while I work. I keep popping downstairs to tell her little things like how to get water out of our fridge and how to turn on Pandora, even though she’s 17 and can probably figure it out. She’s feeding him avocado right now and he’s eating it. Wow. Now I just need to get on with the work part.

Sam had a wonderful first birthday. Played with Grandma and Grandpa, chased balloons, tasted a few crumbs of cake (and spat out a mouthful of frosting). Then, to remind us of the good old days, he slept forty minutes, woke up, and screamed for about two hours until we let him sleep in our bed. I guess babies be babies, even when they’re one.

Rather than posting some”inspirational” video about how motherhood is the hardest job in the world or a cutesy meme about how much wine I drink when my baby’s sleeping, let me come right out and say it: motherhood sucks. Happy Mothers Day.

Today, Sam discovered that the remote is not just an awesome chew toy, but that by pressing the buttons he can control the TV. Wonderful.

First, there was prenatal acne, and the oil slick some might call “glowing.” Then postpartum acne, which stung and itched and roughened my skin to the point where I often liken it to a dinosaur’s. Now, my son has taken to grabbing and pinching me, hard enough that I have an angry red mark under my eye left over from yesterday. What does this boy have against my face?

Watching the first episode of Rugrats. Never noticed before how much the Ender family and the Pickles family look alike.

Sam had quite a boyish day. Played in the dirt and wood chips, crushed a bunch of flowers, stole a little girl’s snack, and then learned to play catch with daddy. All while wearing camouflage overalls.

Imagine my delight, coming back from the bathroom, to find Sam scribbling all over the blackboard … in crayon. (How do I get this off?)

One thing I will say for motherhood: You know all those cute videos where babies discover their eyebrows and bite their dads and dance? For a mommy, that’s daily life.

If you could all collectively hope and wish and pray my son would go to sleep, that would be great.

Apparently it’s worth it to kneel in the gravel until your knees look like hamburger if it means you get to put pebbles into a watering can. My mistake, Sam. My mistake.

Just finished kneading my first batch of bread dough since Sam was born. I’d forgotten what a good stress release it is.

I can no longer say Sam isn’t interested in the TV. Dangit.

Anticipating the day when I go into Sam’s room in the morning and he’s Incredible Hulked himself out of his PJs.

Reason number twelve to award me mother of the year (yes, that is dirt):

Sam will now only eat grapes he’s personally plucked from the bunch. 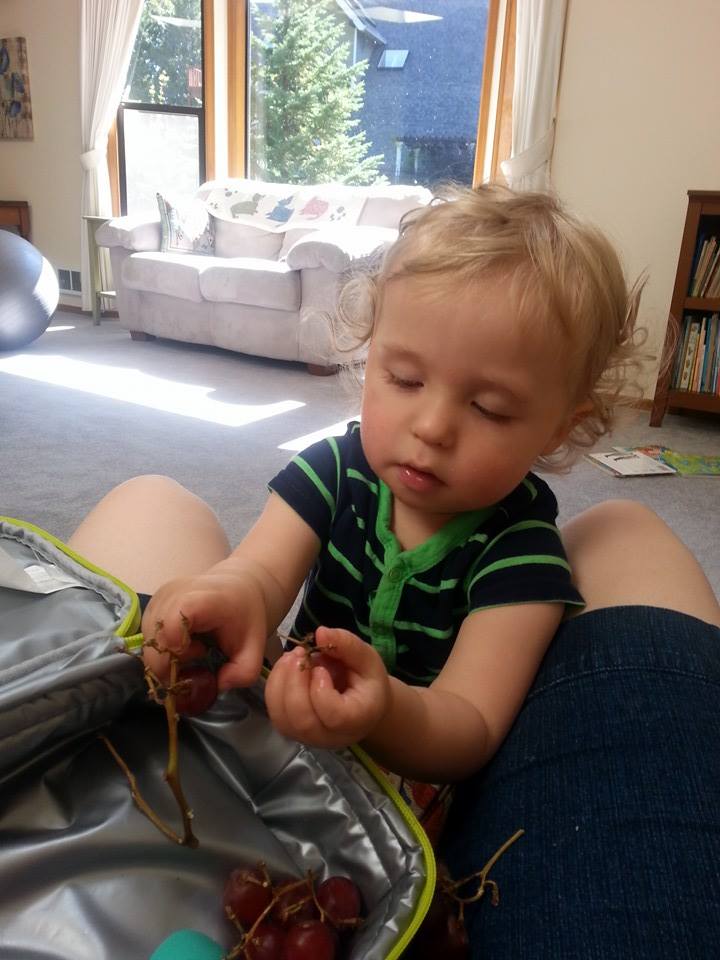 You know you’ve been secluded in Babyland when you tell the barista you’re going to see Casper Babypants and are shocked when she doesn’t know who that is.

My kid is sitting on the floor switching between the blue pacifier and the green pacifier. I think he finally decided the green tastes better.

Today, my son blew kisses at a man with a tattoo on his face.

The Simpsons have ruined me for motherhood. Every time I read Goodnight, Moon, I hear it in Christopher Walken’s voice. (“Please, children, come closer. Don’t make me ask you again.”)

“In his two-piece jammies, he looks much more like an adult baby.” Daddy says the funniest things.

And then Sam found the litter box…

Halloween sure is a good excuse to spend an afternoon putting makeup on my baby.

Sam was hounding me for a piece of my black licorice so I thought, fine, I’ll give him some, and he’ll hate it and spit it out and that will be that. Wrong. My 17-month-old child is in love with black licorice. And now I have black-licorice-spit stains on my carpet because he kept smiling while trying to chew it.

Have I been alone in my house since my son was born? I don’t think I have. It’s FANTASTIC!!!

Well, my twenties certainly went out with a bang. Thanks, ladies, for making it such a wonderful night.

You let your kid be naked for five minutes and he goes and poops on the bathroom rug.

You go to bed at 7 because you’re exhausted and you’d love to catch up on some sleep and your bed is just so, so inviting–and then you wake up at 3 am and the whole thing goes down the toilet.

“Now that you’re a mom, the only surfing you’ll do is under a big wave of responsibility. ” — Mrs. Wong, Futurama

Fridge is all cleaned out in preparation for the Thanksgiving shop. I feel like an athlete prepping for a big game–or probably the athlete’s manager, since most of my prep involves a binder full of recipes, lists, timelines, etc. Either way, I’m a lean, mean, Thanksgiving machine! (Except maybe strike the lean part. But who was it who said “Never trust a skinny cook”?)

I’m thankful my body is still tough enough to sleep on the floor without developing any aches or pains. I’m also thankful for air mattress repair kits.

Weird source of Mommy guilt: using my espresso maker when Sam’s not around. He just loves to rock out to the beat of the water pump.

Not a very stealthy Santa.

Thinking a lot about strangers’ acts of kindness today: all the people who have smiled at my son and made him giggle, the woman who complimented my outfit at Costco, the many women who have helped me calm Sam’s tantrums in various doctors’ waiting rooms, the family that let him push their red wagon and watch Wreck-It Ralph on their tablet while he waited for a blood draw. I’ve spent a lot of my life grumbling about how I hate people, but really, despite their flaws, people can be pretty great.