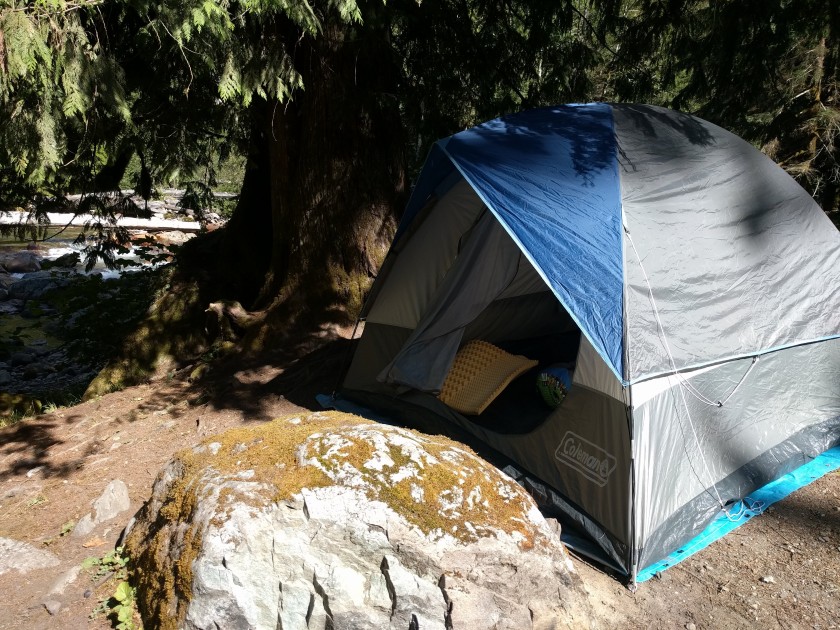 A few weeks ago, we packed our car to the brim with camping gear and headed for the mountains. We had no campsite reservation: we were being adventurous.

We knew the chance of finding an official campsite was slim, but we also knew that the forest service allowed dispersed camping in this part of the woods, and we’d seen many a tent pitched along the river or by the side of the road. We had to drive quite a way, but eventually we found the perfect spot: a bare patch for the tent, some shade to sit in, and only a literal stone’s throw from the river.

(Yes, we took our kids to a campsite right on the water. Where they could have wandered out, slipped on a rock, smashed their heads open and washed away. Spoiler alert: they didn’t.)

We spent a lot of time throwing rocks in the river and cooling our feet in the shallows. While my husband took the kids to gather firewood, I sat on a mossy rock and watched the river flow; for the first time in months, I felt creatively inspired.

You might think that vacations are about releasing the schedule, letting go of life, just relaxing! Yeah, well–they were. Now you have kids, and you don’t get to relax. However, unexpected as it might seem, having a schedule can be more relaxing than staring into the abyss of free time, struggling against the urge to give your kids something electronic so they’ll stop bugging you. You need activities, like:

These are most important before sunset because, let’s face it, the bulk of the camping fun starts when the campfire is lit. Which is why you should always:

Seriously. Do you want to break it to your kids that they can’t toast marshmallows or roast hot dogs? And what are you going to do between sundown and bedtime if you can’t poke the fire with a stick? Poking the fire with a stick is the best part of camping, hands down. Of course, this is an activity for grown-ups and bigger kids, which is why I would advise:

Because, I mean, do you want to break their hearts? A few more reasons to stay home:

In our case, I was spared a sleepless night holding my children by their jammies lest they wander out and drown in the river, thinking every snap of a twig was a bear come for a midnight snack. You see, my husband left the lift gate open on his Subaru for a long time and though no lights were on and no systems appeared to be operating, this somehow drained his car battery. Long story short, we decided to get the car jumped sooner than later and just head home.

So here’s my final tip, which, if we’d followed it, would have changed our trip entirely: Stay in a campground. It means you have to plan ahead and it means there will be strangers doing their camping business on either side of you, but it also means other kids for your kids to play with when things get slow, a loop on which they can theoretically ride bikes or skateboards (or if they’re my daughter, just run and run and run). It means you’ll have a table to put your junk on so you don’t have to leave your lift gate open and have it mysteriously drain your battery, but if it does, it means there’ll be about a dozen motor vehicles within walking distance so you don’t have to flag down cars for a jump.