I love New Year’s Resolutions. I tend to make a lot of them. But there’s one resolution I make year after year:

The resolution to write.

Then again, it isn’t really one resolution. Some years my resolutions are about word count. Sometimes they’re about establishing routines, carving out time–my “writer’s life,” if you will. There are dozens of ways to resolve to write, and that resolution can be regularly renewed or revamped. I’d say there are so many ways to resolve to write, that the blanket statement isn’t enough: we need to focus on a more specific, more concrete goal.

Since I’ve been resolving to write for so long, I thought I’d share some of my more specific resolutions. You’ll notice that they all come with a common theme: Don’t expect too much of yourself. I don’t want you to underestimate yourself, either, but it’s better to set yourself up for success than for failure.

I have done a lot of research on housekeeping. I’ve read articles, blogs, sections of books  on the subject. There’s this one lady who runs a vlog called Clutterbug–that’s all she talks about! Housekeeping is a hot subject and there’s a lot of information out there and if you like to do research like I do, you could keep researching for years. There are so many resources for the hopeless housekeepers of the world, and if you’re an excellent procrastinator like I am you know if you’re doing research, you don’t actually have to clean or organize your home.

Basically, housekeeping is hard. And complicated. And if you have little kids like mine, it can feel like a waste of time. You get it, right? You hate cleaning. I know you do because I hate cleaning, too. Even my husband, who is always cleaning, hates cleaning. He just wants the house to be clean, you know? END_OF_DOCUMENT_TOKEN_TO_BE_REPLACED

Get ready, book nerds, because it’s not just going to be cooking. As I told my YouTube audience: END_OF_DOCUMENT_TOKEN_TO_BE_REPLACED

Whenever I talk to a writer, it seems like the topic of writing time is broached. Granted, I don’t talk to a lot of writers anymore (though I’d like to change that); most of my conversations revolve around preschool and poop. But whether conversing with a writer or a mother, I find that the tone is often the same:

How often do your kids poop? How often do you write? Is once a week enough? Have you tried sleep training? I start an egg timer and I stay at my desk until it buzzes. I’m doing NaNoWriMo this year. I’m taking a parenting class at the Y. They say things happen in their own time. Have you tried probiotics? Have you read Burning Down the House? Charles Baxter is a genius. I hate Dr. Sears. All you need is fresh air and exercise, and things will fall into place. END_OF_DOCUMENT_TOKEN_TO_BE_REPLACED 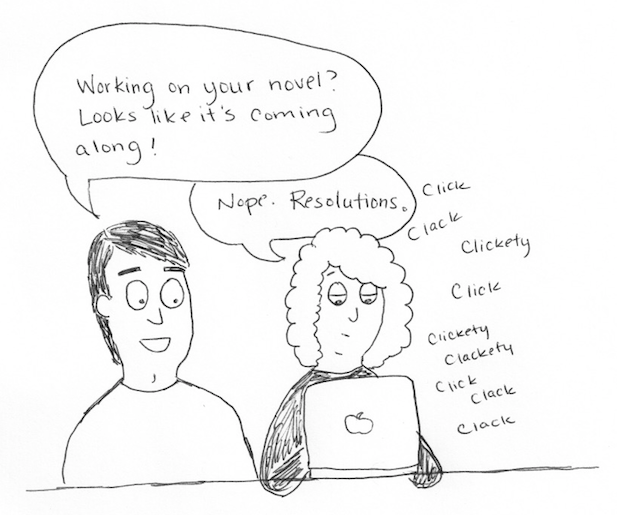 New Year’s is one of my favorite holidays. It not only speaks to my inner overachiever, but it plays into my sense of self-loathing! Seriously, though, I make resolutions for myself throughout the year–there’s always something that can and ought to be improved upon, some new skill I’d like to acquire, or some magical change I’d like to make–but on New Year’s, it’s culturally sanctioned. When the calendar changes, we change. That’s the idea, anyway.

Now, you might be thinking that no one really follows through with resolutions past, say, February, but I do. One year I resolved to eat (on average) seven servings of fruit and vegetables per day. That one lasted through the summer. One year I resolved to try as many new foods as possible and to revisit foods I thought I didn’t like. I blogged about that one, to try to keep myself honest. That lasted a solid ten months (the holidays, which for me begin on my October birthday, always trip me up). One year I resolved to get involved in the theater and spent the next five years constantly in or working on the crew of a play.

Every year, I come up with literally hundreds of things I’d like to change, but I’ve found that the only way I can follow through and feel successful is to focus on one item, and it can’t be anything I have to do every day because if I miss one, I feel like I failed and am apt to give up entirely. (Note how my fruit and veg resolution included the phrase on average–there’s built-in amnesty and a chance to play catch-up). It also shouldn’t be too specific. If I say I’ll lose 15 pounds and I only lose 12, I feel like a failure. If I say I’ll run three times a week and I get a long-running cold: failure. END_OF_DOCUMENT_TOKEN_TO_BE_REPLACED